On the court his talent is obvious, his skills are undeniable, his ability – unmatched.

But off the court Deron is a very different person. There’s no showmanship and no added bounce in his step. He is who he is and he’s comfortable with it.

As he sat courtside (a precaution after the wrist inury he picked up playing against the Phoenix Suns prior to flying over to England) while his teammates finished off their first training session since touching down in the UK, his hands were in the pockets of his Nets hoody, his eyes glazed over and a sullen look was on his face.

Speaking to him didn’t change his demeanour but that’s to be expected.

You see, Deron Williams is a guy who recently had his life turned upside down when he was traded from the West coast Utah Jazz to the East coast New Jersey Nets and didn’t find out from his team. He found out via Sportscenter.

“It’s tough getting traded midseason and leaving your family. But these are the situations that happen in all sports, not just basketball. People get traded, it’s a business, you know that coming into it. I’ve got a business decision to make when it’s my time.”

But Deron’s time won’t come for another 17 months when his contract will need to be renewed or he’ll need to be traded away. For now, he’s being the good soldier and going to work as he’s always done before. But there’s no doubt that his situation has drastically changed in the last 2 weeks.

Being in New Jersey and playing under coach Avery Johnson is a world away from being on the Utah Jazz. In Utah, he was a big fish in a small pond, playing under head coach Jerry Sloan who had been in charge of the Jazz for as many years as Deron Williams had been alive (26).

It was nothing that Sloan did during Deron’s time at the Jazz which saw him traded, more the eventual departure of Sloan which appeared to impact Deron’s career path and eventually saw him end up in NJ. Deron took the brunt of the blame for allegedly making Sloan’s tenure so unbearable that he had no choice but to leave. The widespread belief is that the Jazz had then had enough of Williams too and he was traded.

With such a huge difference between big market New Jersey and small market Utah, you’d think there would be a difficulty in adapting to the pressures. Does Willams have a preference to the size if the marjet ge plays in?

Whether his answers are designed to make him unapproachable or whether it’s because he’s genuinely unduly concerned, Deron gives the impression that he’s content to take things as they come and not invest too much energy in stressing about them.

Having the carpet pulled out from under you will do that to a man.

So now that he’s in New Jersey will he be signing an extension? ‘I can’t sign anything until the collective bargaining agreement’. Nothing more said and I guess nothing more needs to be said.

After all, Deron does all his talking out on the court. 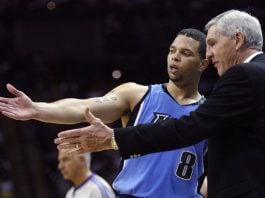 Deron Williams vs. Jerry Sloan: A beef so spicy the legendary... 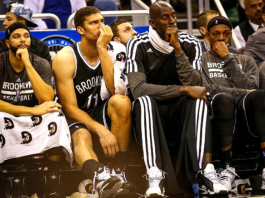