Spanish superstar Pau Gasol is fighting in NBA playoffs where his team Lakers lead the series 3-2 against Jazz. The chances for him to win NBA title are good as never before. That’s one of Gasol’s dreams as a player. The other is to win an Olympic medal, preferably gold medal.

Pau Gasol gave a short interview to FIBA talking about his season in NBA and the most anticipated sporting event of the year, Olympic Games in Beijing.

“I am in a good moment in my career, a sweet one in which I feel privileged and fortunate for what I am experiencing. The cherry on the cake would be to win the NBA ring and the Olympics would be a dream for any player.”

“We are going to the Olympics determined to fight to do something great, even though the level is very high,” Gasol said.

“We have chances to succeed but we must go slowly. My aim as a player is to win an Olympic medal and if it can be a gold one, all the better.

“My only aim is to continue to work day-by-day and to achieve my objectives.”

“I don’t think there is a team that can prohibit a player from going to the Olympics, so when I heard the story about Garbajosa, I was surprised.

“It’s true that Jorge’s situation is and remains special, but I am convinced that this will be sorted and that Jorge will be with us in Beijing because for the national team, he is a fundamental player.”

Spain has been draw in the same group with United States, China, Angola and two teams that are yet to be decided in Olympic Qualifying Tournament. 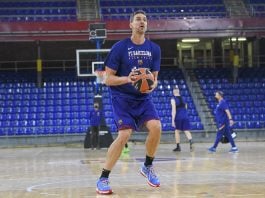