Zalgiris’ new signing Mamadou N’Diaye took his time to answer our questions about his new club, himself and his career. N’Diaye came to Zalgiris from Greek club Panellinios in February on loan till the end of the season. Despite joining the club in the middle of the season Senegalese center found the rythm fast and became an important player.

Mamadou N’Diaye was 26th draft pick by Denver Nuggets in 2000 NBA Draft. Before that he played for Auburn in NCAA. He spent three seasons in Toronto Raptors and a season in both Dallas Mavericks and Los Angeles Clippers. In 2005 N’Diaye moved to Europe to sign with a Greek club PAOK. He started 2007-2008 season in Panellinios Athens before joining Zalgiris.

After playing in two strongest competitions in the world (NBA and Euroleague) which one do you like better?

I like both leagues. Definately the NBA is the best league and more challenging but I am really enjoying right now playing in the Euroleague.

You played in a few clubs already. What is the most beautiful city that you have stayed and played basketball in?

I like Toronto a lot. I played there with the Raptors for 3 years and it is not only about the city but I had some very good experiences there on and off the court. Also many friends and I felt very comfortable living there.

Who is the best coach you have worked with?

His name is Mike Laplante. He is the coach that came to Senegal and saw me and gave me a chance to go to the USA. He is like a brother to me and until now we have very good relationship. He was an assistant coach at Auburn when I was there.

Looking back to your career. Which coach helped you the most?

Once again it is Mike Laplante. When he came to Senegal in 1995, I was almost 20 and just started playing basketball couple of years earlier. Also I was very skinny. So he saw some potential in me and gave me the opportunity to develop and to go to the USA and try to make a better future for myself and my family.

Your recent clubs have devoted fans. Is their support important to you?

Yes, for sure we have great fans here. It’s great playing in front of them. You really want to give your very best not only for yourself but for them also. Their support is very important for us and means a lot.

Let’s talk about your career in Greece. What happened with the coach Kalafatakis in Pannelinios?

I am not really sure what happened with coach Kalafatakis. I really like him as a coach. I was playing very well under him. And I wish him and his family the best.

Was Kalavadakis being fired the reason why you left Pannelinios?

About his firing, it is not my decision. I am a player with a contract to the team. I am required to play and I do it at the best of my ability regardless who the coach is.

You came to Zalgiris straight to Euroleague Top 16. How did it feel making a debut in the strongest European basketball competition?

It is great. Playing for Zalgiris is a great opportunity for me and a big challenge. I am very excited and want to give my best to help the team.

Zalgiris lost their last three big games (against Real Madrid, Olympiacos and Lietuvos Rytas). Is the club in a bad period?

We lost a few games but  most of those games we had a chance to win. We have very good team but we haven’t been able to win the close games. We will be fine. We need to learn from these tough losses and be better next time we are in the same position.

You played against Zalgiris’ arch rivals Lietuvos Rytas. Do you think they are capable of going to Euroleague Top 8 or even the Final 4?

I believe Rytas have very good chances. Most of the games are decided by one or 2 big plays. I think at this stage anybody can beat anybody.

How does it feel to play in a basketball-crazy country?

As a basketball player it is very nice to play in a country where people know basketball and love it. Whenever you are in a place where your work is appreciated it is a great thing.

If you had a chance to stay in Zalgiris, would you want to?

I like it here a lot so if the situation was favorable for me to come back next year I would.

Senegal will not be participating in Beijing Olympics this summer. Will you be supporting another national team? Do you have some favourites?

I hope that Angola will have a good showing for the entire continent of Africa. Beside that I just want some good games and may the best team win.

Basketball is making progress all over the world and Senegal is no exception. What is the state of this sport in your home country?

In Senegal soccer or football is the main sport. Then you have senegalese wrestling and basketball fighting for 2nd and 3rd. Basketball is developing but has a long way to go until the day when the potential we have in Senegal be reached.

Do you have any dreams regarding Senegal national team?

My dream from Senegalese basketball is to see it reach its full potential. To be on top of African basketball and be one of the best team in the world.

What are your hobbies?

I like to read religious book and mostly Islamic books. When i get a chance i play chess.

Where do you spend your time?

When I am not on the basketball court I spend a lot of time at home relaxing.

Thank you for your time answering our questions Mamadou. All the best in your career. 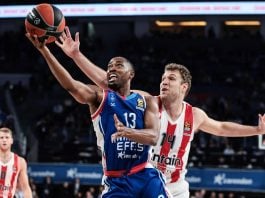