Lottomatica Roma recorded another win of pride -after beating Olimpija in Ljubljana- this time against Maccabi Tel Aviv with 82-69.

The guests took an early 0-7 lead, with usual suspect Sofoklis Schortsanitis ruling the paint against Roma’s weak frontline and with Chuck Eidson adding a 3pointer. The Italian side reacted and in the final minute Charles Smith scored 5 in the row for his team and Roma went to the first break being up by four (21-17).

With David Bluthenthal and Milan Macvan combining for 10 points early in the second quarter and Jeremy Pargo picking it up from there later, Maccabi won the quarter with 21-25 and the two teams went to the locker rooms tied at 42.

The guests looked rather bored in the second half, scoring their first bucket four minutes into the third quarter and scoring a mere six points over that span, allowing the hosts to pull away with 60-48 after 30 minutes.

And they were not done. After 38 minutes the margin had grown to 16 points (74-58) and would stay around that until Doron Perkins scored in the dying seconds for the final 82-69.

Maccabi Tel Aviv will face Caja Laboral in the quarterfinals with the latter having homecourt advantage. 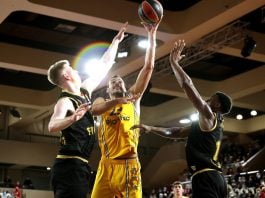