CSKA may be with the face in the mud right now in the Euroleague, yet they are surely not to be written off. As Andrey Vatutin stated to Russian media, CSKA is going to fight for any chances they have to advance to the TOP16.

“Our primary goal is to go after any chances we have to advance to the TOP16. In that frame we have to start by beating Panathinaikos on Wednesday. Neither the fans nor the management of CSKA can accept the fact that in six Euroleague games we have just one win in the bag.” said Vatutin.

CSKA’s president went on to talk about Dusko Vujosevic: “Dule could not find a common language with the youngsters. Neither literally nor figuratively. Once we signed the contract, we tried to have Vujosevic learn Russian as soon as possible.

Language in itself is just a means of communication. Vujosevic just could not get the players to trust the coaching staff. Maybe if CSKA had started the season with some victories, the problem (trust) would not occur.”

Regarding the statement of Vujosevic that the American Tour harmed the team, Vatutin commented:”Sure the change of timezones affected the team, but the crucial factors where the home defeat against AJ Milano and the loss against Efes Pilsen in Istanbul. The former could have been affected by the American Tour, but playing against NBA professionals can only contribute to improving the skills of our players. Only against the best you can grow.

Vujosevic was on tour for almost 20 days in the US last season with Partizan and yet they reached the Final Four.”

About the rumors that CSKA is negotiating with coaches:” Right now we are not negotiating with anyone. The team is coached by Dmitry Shakulin and before him lies the task to beat Panathinaikos and advance to the TOP16. If we see that he is moving the team to the right direction, we will trust him to continue his work.” 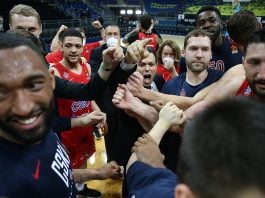 CSKA Moscow in search for an NBA player to complete the... CSKA Moscow president claims there will be a 30% reduction in...

Andrey Vatutin on the CSKA-Milutinov deal: “Why just 9 million? Write...