Home Interviews VIDEO: Interview about everything from Lithuania with Jermaine Love

There is no one on this Earth that could tell to Jermaine Love that he is no good. Full of confidence 27-year-old shooting guard can easily tell that whosever guarding him, he has a miss-match. One of the leaders of Nevezis Kedainai, Love, gave an open interview about his life, his basketball career, movies, shoes, simply about everything.

Love who is playing in Lithuania for awhile now gave a speech that could inspire either young or older people whom are still reaching for their dreams. American said: “I don’t care who is guarding me, I don’t care if it is one on one or two on two, if big guarding me, I feel like I always got a miss-match.

“I don’t know if it is arrogance or confidence, it depends on how you look at it. But I am really confident in my abilities and there is no one on this Earth that could tell different. Michael Jordan or Kobe Bryant can try but just try. It might be different conversation because they are so great but it still wouldn’t make me feel worse about myself.”

Even though, Love has a lot of confidence in himself, he had a problems last season when he played for Lietkabelis Panevezys. He said: “I was so hard on myself to the point where I was loosing confidence. I was asking myself: “Hey, can I make that play? Can I shoot this shoot?” Only towards the end of the season I figure it out and told myself: “Hey, you good, you are damn good. Rely on your instincts.” And the thing I’ve learnt is just that you need to move on.”

“I never doubt my teammates so I’m going to every game believing that we are going to win. Once the playoffs come anything can happen. Any team in this league can beat any team and that’s how I feel. I don’t care about seeds, I don’t care if one playing eight (first place against the eight place), or two playing seven (second place against the seventh place). I don’t care of none of that because everyone is the same inside of those four lines. ”

Jermaine also told what stat he used to check and what made him so mad. Love said: “Earlier this season I checked my field goal percentage because I have a goal to shoot 50-40-90 (50% from the field, 40% from the three points line and 90% from free throws line.) so I checked how I was shooting and I was so pissed how bad I was shooting. I used to check it three times a day telling myself “It has to change!”. But now I don’t care I just go out there and play and do the best I can.”

Once we started to speak about less serious topics guard showed his other side. Fans know him as a fighter on the court, hard worker off the court and a guy that never gives up. But Jermaine showed that off the court he is simple, funny person.

Although, before that some warnings to Love’s opponents as he said: “I hate every single team except of the one I am playing for. There is no team I like and I think everybody feels like that. When I go on the court I don’t care what I am playing against, I don’t care if it’s my friend. If he’s not going to play hard on me because I am his friend he will lose respect instantly. I want everyone to try to kill me on the court because that’s what I am trying to do. That’s the only way to win my respect.”

Love told that he is always first in the gym and he always asks for a place to live as close to the gym as possible. But when he’s not practicing, what obviously takes most of his time, he said he likes to watch movies. Every man can relate to him as he said: “With my girlfriend I watch soft movies and by soft I mean the ones you always hear that sniffling by your side and you just look over and she’s already crying.”

Although, his girlfriend got back to him very soon as after question if he watches his own highlights after Jermaine said that he does, she said: “All the time! Babe, look at this, look at that.”After miming Jermaine and after good laugh Love said: “I do watch it, I think it’s cool but after the game I am so ready to watch the film and not only because of a good plays but because of the bad plays too. I want to see where I can improve.”

Huge Nike and Kobe’s shoes fan told a story from college times where his coach forced him to play in Adidas. Chicago native said: “I did play in some D-Roses in college but the grip on them was terrible, it just was not good and that season I used to play in Adidas in practice in Nike.” After the interview Love also said that because of how many shoes he bought  from Nike, they should start sponsoring him.

He also added why he would never buy Jordan shoes: “I just feel that it wouldn’t look good on my feet. And if I buy a pair of Jordans to myself, I got to buy a pair for my lady, right?”

But more about Jermaine and his life in the video interview down bellow: 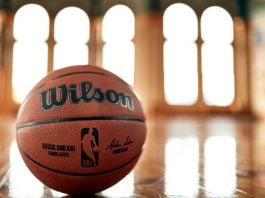 Milos Teodosic shines like a Sun against Phoenix (VIDEO)