Rheanna Bailey led all scorers with 23 points and 13 rebounds for the victorious Mystics but it was Great Britain international Dominque Allen who claimed MVP honours with 21 points and 11 boards with an overall index rating of +30, five greater than Bailey.

Another Great Britain international and Mystics captain Georgia Jones added 16 points as she lifted the first WBBL Cup in front of her dad and Manchester head coach Jeff Jones.

Lauren Hebert led the Wildcats with 13.

The game began Cup finals day in Birmingham with Newcastle Eagles facing Glasgow Rocks later on in the afternoon. 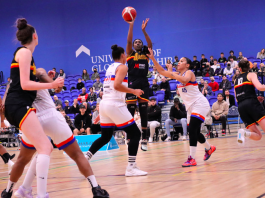 Professional team for Durham the final piece of jigsaw in becoming...

Sevenoaks Suns, driven by Carr pull away from the Wildcats