Facebook
Twitter
ReddIt
Email
In its quest to return to the Turkish Airlines EuroLeague Final Four next season, Laboral Kutxa Vitoria Gasteiz has found a new point guard, Shane Larkin, to augment its backcourt.
Larkin (1.80 meters, 23 years old) arrives from Brooklyn of the NBA, where he started 17 of 78 games last season and posted averages of 7.3 points, 4.4 assists and 2.3 rebounds in 22 minutes per game. He played in Brooklyn with another recent Laboral signing, Andrea Bargnani.
Larkin started a few more games and averaged a few more minutes the previous season with New York after having opened his pro career with Dallas in 2013-14. All told, Larkin has appeared in 202 NBA games with averages of 6.8 points, 3.2 assists, 2 rebounds and 1.1 steals. Prior to the NBA, he was at University of Miami in the NCAA for two seasons, being named the Atlantic Coast Conference player of the year in 2013.
Source: EuroLeague

Report: Vasilije Micic not going on NBA, to stick with Efes... 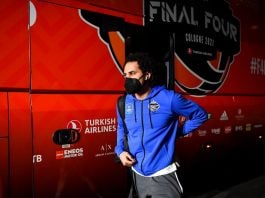