Donatas Motiejunas will start his foreign career at the age of 19 after signing a contract with Benetton Treviso. One of the top prospects in the world was wanted by his hometown club Zalgiris too but decided that it would be better for him to move to Italy.

2.13 m tall center, who turns 19 in September, made a debut in the top division in Lithuania with Aisiciai last season. He was highly successful with 19.9 points and 7 rebounds per game helping his team pull out a surprise and reach Lithuanian Cup Final Four.

Motiejunas is widely considered as a top 5 draft pick in 2010 NBA Draft. 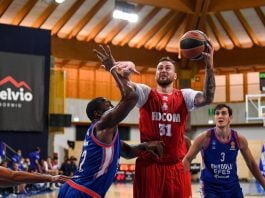 Donatas Motiejunas to reportedly sign with the San Antonio Spurs