Israeli point guard Gal Mekel is reportedly in talks with Unicaja Malaga who are looking for a replacement to Stefan Markovic, who has been sidelined with an ankle injury.

Mekel was recently waived by Crvena Zvezda and has not been able to find a club since.

But the Israeli international and former Dallas Mavericks guard would be a suitable replacement for Markovic, who injured his ankle while fighting for a rebound in a Liga Endesa game against Zaragoza.

He was diagnosed with a fractured fibula causing acute instability in his ankle. He underwent surgery in Malaga on Monday and is set to miss the majority of the Euroleague Top 16 as well as a leage chunk of the Liga Endesa season.

Markovic is averaging 3.6 points and a team-best 4.9 assists in 10 Euroleague regular season games this season. 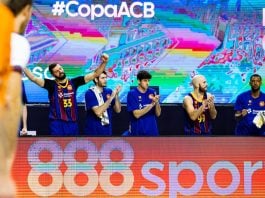