Grizzlies superstar Ja Morant will have to pay a fine of $35,000, the NBA announced.

The 23-year-old point guard has been fined for ‘confronting and directing inappropriate language toward a game official and failing to leave the court in a timely manner following his ejection.’

The incident occurred during a game between Memphis and Minnesota which was won by the Timberwolves (109-101). 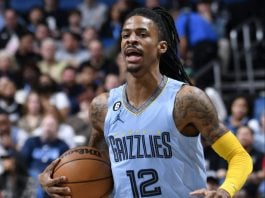 Michael Beasley on Ja Morant: “He’s one of those back-to-back MVPs” Draymond Green reacts to Ja Morant’s claim of being ‘fine’ on... Ja Morant has been sued