“Each game, he’s progressively getting better. Confidence from the three-point line, decision making, still taking a little bit of time. How defenses are guarding him, he’s getting some different looks. His touch finishing around the rim will come along just with more reps, and especially against physical NBA defenses. And then defensively, he’s been doing what he’s doing. Has had some big rebound nights, blocked shot nights. His activity is huge for us defensively. That block at the end, it was perfect execution. We talked about staying home on shooters, but if Embiid got downhill or if a driver got downhill late, we needed someone to come over. And we know Jaren’s gonna be that guy. So big time block, big time play to seal the win.” 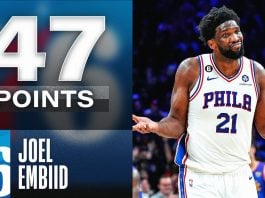