The Boston Celtics have extended Al Horford with a two-year, $20 million deal, ESPN’s Adrian Wojnarowski relayed. As provided by Adam Himmelsbach of The Boston Globe, the salary of the new contract by the big man will be fully guaranteed and will contain a trade kicker.

Horford already expressed his intentions to remain in Boston and bleed green until the end of his career. At the end of the extension, he will be 39 years of age and will definitely ride the twilight stage of his solid career.

Upon his return to Boston last season after spending two-straight years in the Philadelphia 76ers and Oklahoma City Thunder, the never-aging big man revived his status and became a significant piece for the Celtics anew. Serving as their needed anchor, mentor, and presence within the locker room, he finally reached the NBA Finals with the Cs last postseason.

Still, without Rob Williams III who has been progressing well in his knee recovery, the former All-Star big man is boldly carrying a heavy load in front for the top-seeded Celtics. This season, he is averaging 10.9 points on 55.5 percent shooting to go with 6.3 rebounds, and 2.8 assists in 31.3 minutes in 18 total games played (all starts).

Before going back to Beantown, Horford played four seasons for the Celtics from 2016-2019. He ultimately left in the summer of 2019 to go to the Sixers.

The extension can only truly mean that both Horford and the Celtics are well determined to run it back and capitalize on their championship window for two more years to come. 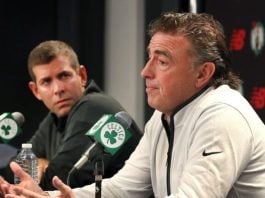