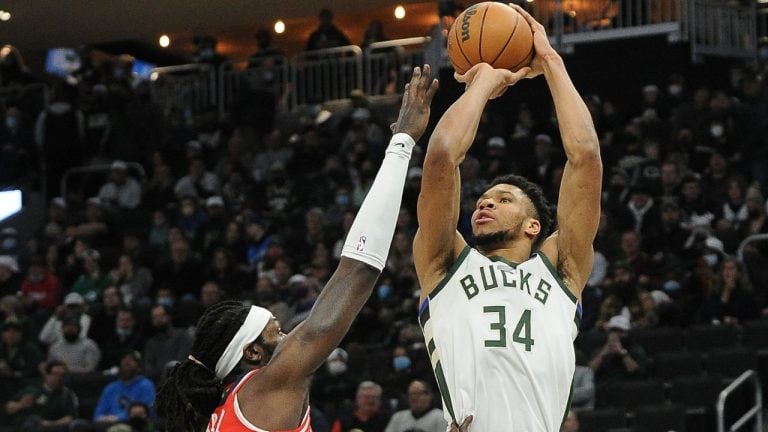 Both Giannis Antetokounmpo and Montrezl Harrell had a heated exchange in the post-game court moments of the Milwaukee Bucks-Philadelphia 76ers bout, per The Athletic’s Joe Vardon. Upon the public uproar and murmurs on the social media circle of the league, it appears that the incident gained much clearer details to understand.

Based on the narratives of Vardon, Antetokounmpo proceeded to shoot practice free throws after a horrible night against the 76ers wherein he drained 4-for-15 from the line, the worst of his career so far. After making seven-straight attempts, Harrell snatched the ball up on the basket and went into the sidelines, shouting “This isn’t fu– Milwaukee! … Get that s– out of there!” against the two-time MVP.

Antetokounmpo offered Harrell to accompany him in the shooting drill, which the reserved big man denied. Sixers skills coach Jordan Love approached Antetokounmpo and told him he cannot have the ball back and continue the shooting practice. As a response, the Greek sensation left the court only to bring two basketballs with him.

Upon his entrance again, workers of the Wells Fargo Center have planted a ladder in front of the rim that Giannis is shooting. Antetokounmpo politely asked the workers to remove the ladder, but they insisted.

Out of anger, Antetokounmpo approached the ladder and shoved it aside to continue his shooting. As he continued his drill, Harrell was barking on one end of the court.

“Yeah I took the ball, get the f– outta here,” Harrell shouted, with Giannis answering “I’m doing my f— job.”

As Giannis finally took an exit, his brother and Bucks teammate Thanasis Antetokounmpo reached out to Harrell. Harrell for his part threatened Thanasis by saying “I’ll beat your a–” and “You better send that s– back to the locker room.”

After an hour, the two-time Finals MVP declared that he didn’t have the intention to try disrespecting everyone in the incident that occurred, noting that he is just trying to do his job.

He also believes that it is “unprofessional” to kick someone out or “put the ladder in front of somebody while he’s doing his job.”

“I never try to disrespect anyone, in any way shape or form,” Antetokounmpo said, per The Athletic. “I feel like today was just unfortunate event that took place. I think people did not respect the fact that sometimes players want to get some extra work in. I think it’s unprofessional to kick somebody off the court or take the ball or whatever the case might be. Or put the ladder in front of somebody while he’s trying to do his job.

“We get paid to do this. They didn’t just pick us. We get paid.”

Philadelphia won the match, 110-102, with Antetokounmpo tallying 25 markers, 14 boards, and 4 dimes on the losing effort.

The Bucks won’t fly and battle the Sixers again in Philly’s home turf this regular season, but it can only happen if both teams will manage to face each other in the playoff arena next year.