Lakers’ sophomore Austin Reaves filled the statsheet during the team’s second preseason game against the Suns. The 24-year-old shooting guard finished the game with 6 points, 9 assists, 7 rebounds, 3 steals, and 2 blocks.

Newcomer Patrick Beverley was impressed with what he has seen so far from Reaves. After the game he praised his new teammate, saying that he will take him under his wing this season.

“He’s been so impressive this year,” Pat Bev said about Reaves. “He’s one of those guys I know he’s gonna be under my win for most part of this year. I like his mentality, I like his effort. He knows how to play the game of basketball, he’s not scared of anything, he’s tough.” 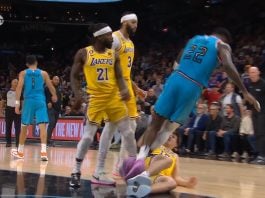