Jae Crowder will very likely continue his career on another team after reportedly requesting a trade from the Suns. According to via Brian Windhorst of ESPN, the 32-year-old power forward was told by the team that he may not be a starter this season.

After learning that, Crowder decided to make a trade request. So far the Suns have been unable to found an acceptable deal, but it is thought to be only a matter of time.

The player was allowed to not join the training camp and later tweeted a cryptic message – the signs that point to the fact that he will no longer play for the Suns.

According to NBA insider Shams Charania, team like the Celtics, Grizzlies, Mavericks and Heat are potential destinations for the veteran forward.

Crowder started in all 80 games (regular season and playoffs) that he played for Phoenix last season. He averaged 9.4 points, 5.3 rebounds and 1.9 assists 28.1 minutes per game. He spent two years with the Suns. 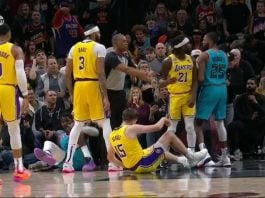