In the eyes of the great Kareem Abdul-Jabbar, a public apology isn’t enough and convincing to repair the damages that Anthony Edwards has inflicted by his recent homophobic remarks.

On his Substack, Abdul-Jabbar is demanding Edwards to go beyond words and lead through actions via “volunteer work” in order to redeem himself from the controversy he had.

“It would be easy to dismiss Edwards’ immaturity—he’s only 21—if not for the fact that we’ve seen so many cases of famous athletes and owners in the news spouting racism, misogyny, and anti-LGBTQ+ sentiments. This damages sports in general and their teams specifically, and revives the old stereotype of the dumb, bullying jock.

“But more important, it perpetuates prejudice against a group and that prejudice often leads to restricting rights and to violence. I don’t think an apology—however heartfelt—is enough. Edwards needs to repair the damage with some voluntary community service with LGBTQ+ organizations, particularly youth groups, to show his support. If he can’t do that much to undo the harm he’s caused, then his apology is meaningless.”

As a social justice champion and a vocal figure of human rights, Abdul-Jabbar’s constructive criticism of Edwards speaks volume. The standout guard has to deliver more than just an apology to fortify his regret over the incident.

Edwards drew flak from LGBT groups and advocates after mocking a shirtless group of men and delivering a hate speech directed to them while recording. Shortly after posting it to his Instagram story, the Minnesota Timberwolves guard quickly deleted the clip and expressed his apology.

The NBA, who handed Rajon Rondo, Nikola Jokic, and Kevin Durant their respective punishment from the past due to their homophobic statements, is yet to be determined if they’ll announce a sanction against Edwards. 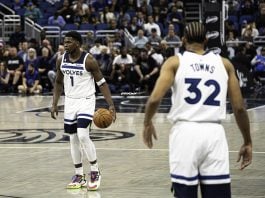