Draymond Green is convinced that the Golden State Warriors’ beautiful style of play has enchanted Kevin Durant in the 2016 offseason.

“KD wanted to play good basketball,” Green said on this appearance in the “Checc’n In” podcast (h/t NBC Sports’ Eduardo Razo). “You saw the type of basketball we was playing, guys moving the ball. It’s Steph hot. Everybody running screen for Steph. Everybody trying to get Steph the ball; we having fun.

Green added that even before the Oklahoma City Thunder went up 3-1 against them in the Conference Finals, Durant was showing shades of desire to join them in the Bay Area.

“Everybody’s running pick and roll and taking advantage of mismatches because that was the cycle that the NBA was in,” Green added. “We then changed the game of basketball and how basketball was played.

Following OKC’s disastrous collapse upon blowing a 3-1 series deficit against the Warriors, Durant controversially took his talents to Golden State, and the rest was history. 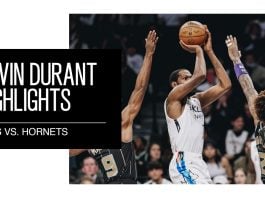