Grizzlies’ sophomore Ziaire Williams completed his first year in the league. He started 31 out of 62 games that he played averaging 8.1 points, 2.1 rebounds and 1 assist in 21.7 minutes per game.

Like many young players, the shooting guard who will turn 21-years-old next week, has stars that he looks up to and tries to model his game after.

Being a 6’9″ guard, Williams gets compared to Kevin Durant. However, the Nets superstar is not the player that he feels similar to. Instead, he says it is Paul George.

Via Sam Yip of HoopsHype:

A lot of people say KD, ’cause I’m tall, and I could shoot. I feel like KD’s just KD though. Maybe Paul George, but I don’t know, man. I love to just watch players. Maybe Jayson Tatum’s sidestep or Devin Booker‘s face-up game. Paul George‘s size up and just take all their stuff and putting it into my own. I’m my own player, we’re all our own players, but if I had to point out players it would probably be my own. 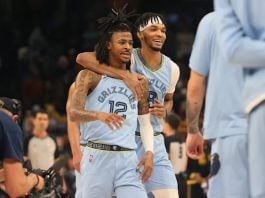 LeBron James reacts to playing against Ziaire Williams in NBA