After previous news have floated suggesting that he is set to have a shoe deal with Nike which will be named “Nike Ja,”  All-star guard Ja Morant appears dismissing a particular report.

Though there are multiple reports coming in that they landed a deal, an update from both Morant and Nike remains nonexistent yet.

The Memphis Grizzlies star inked a multi-year contract with Nike ahead of being drafted in the 2019 Draft as the second overall selection. 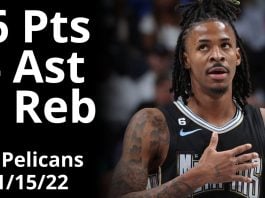