“He’s been around the facility shooting and working out. It’s been a slower than anticipated ramp-up. They’ve got Pat, so he’s the best addition of the offseason, but there’s a chance Nunn is the best free agent addition they make getting him back. He’s a guy they spent the taxpayer mid-level exception on last season. He was pretty solid during his first couple of years in Miami as a combo guard. He’s someone who could develop into the sixth man for this team.” 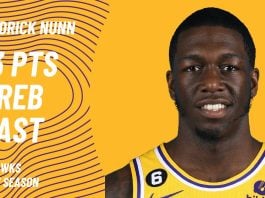