After missing the entire 2021-2022 NBA season due to a torn ACL, Jamal Murray is getting closer to his best shape. Some of the footage from this offseason appears to indicate that he is ready to play.

The 25-year-old point guard does not expect to play many minutes when the season starts though. Instead, he will increase the time he spends on the court gradually and is confident that he full be back to full power as the season progresses.

Via Matthew Sullivan of news.com.au:

Murray, who has looked sharp training on court during his visit to Australia, expects his court time to be managed at the start of the season but is “very confident” his knee will hold up. “I feel good,” he said. “Just getting stronger rehabbing throughout the summer and just trying to prepare for the season. Yeah, feeling good. “I mean it’s not going to be 40 minutes to start, but I expect myself to be back at full power at some point during the season.”

Prior to the injury, the Nuggets point guard averaged 21.2 points, 4 rebounds and 4.8 assists in 35.5 minutes per game. 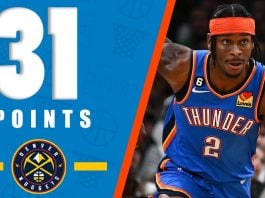 Nikola Jokic enters health and safety protocols, out for Nuggets on... Michael Malone: “Mathurin. What a hell of a player he is....