The first part of the opening night double-header of the 2022-2023 season will feature two staunch Eastern Conference rivals.

Per Shams Charania of The Athletic, the Boston Celtics and the Philadelphia 76ers are set to collide inside the TD Garden on Oct. 18.

These two contending heavyweights have modified themselves in this offseason via significant trades, signings and acquisition — in preparation of what could be a potential title year.

Fresh from their first NBA Finals appearance, the Cs have deepened their roster after gaining Malcolm Brogdon from the Indiana Pacers and inking Danilo Gallinari on a deal.

Meanwhile, the Sixers have secured James Harden’s service in a contract extension, while getting significantly better upon snatching P.J. Tucker and Danuel House in free agency and De’Anthony Melton via trade with the Memphis Grizzlies.

Both teams contain sky high championship aspirations, and getting that first victory of their new season serves as a good start to keep the winning momentum going.

After the Celtics host the 76ers, the Golden State Warriors will then impose their title defense against the visiting Los Angeles Lakers in the opener.

Both Philly and Boston split in their four-game season series last basketball year. 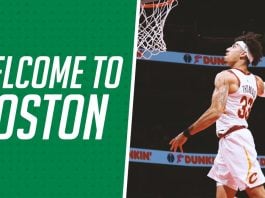