The second release of the NBA Creator Series in Europe features Greek artist Charis Tsevis with a work called “A man’s character is his fate,” named after the quote by Greek philosopher Heraclitus. The NBA Creator Series is a series of original artwork commissioned by the NBA featuring artists from France, Greece, Italy, Spain and the UK in celebration of the league’s landmark 75th Anniversary Season in 2021-22. Featuring a diverse range of styles and compositions, each piece of artwork is centered around the artists’ passion for the NBA, their favorite moments from the league’s history, and the connections between Europe and the game of basketball.

Based in Pafos, Cyprus, Charis is a multiple award-winning visual designer, illustrator and art director who specializes in digital mosaics, high-complexity illustrations and neo-futuristic compositions. Since 1996, Charis has been a visiting professor of editorial design and typography at several educational institutes around the world and has delivered lectures at a number of national and international conferences and symposiums. Charis’s artwork will be released today, Aug. 9 on Facebook (@NBAHellas), Instagram (@NBAEurope), Twitter (@nbahellas) and YouTube (@NBAEurope).

Charis Tsevis: “Giannis Antetokounmpo is a true hero for me, a natural source of inspiration. He was born and raised in the same neighbourhood as me. I know how difficult that area is, especially for a family of Nigerian immigrants. He went through some tough challenges, and he faced and surpassed them one by one with great class. He is still an incredibly humble person showing a solid character. It’s not just basketball. Anything Giannis is doing – even the tiny details – shows an incredibly educated and wise person. He is indeed honouring the Heraclitus quote in a very positive way.“

“Trying to express all these, I created a mosaic portrait of Giannis made out of classic Greek keys and patterns. At the same time, I wanted the artwork to reflect two identities. One solid Greek and one African and cosmopolitan. That’s why I have coloured the patterns following the traditional Aso Oke fabrics tints typical of Nigeria. Then I created a structure that mimics a typical African stained-glass window honouring the African churches and their central role in social movements in Africa but most of all in America. In times like these, the world needs people like Giannis. A positive role model, an educator who teaches with simplicity and humour, a champion made through hard work and dedication, and finally, a healer. Someone to have as an icon that made us feel better.” 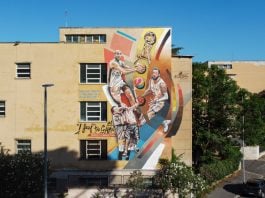 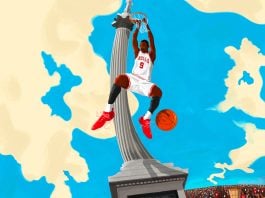 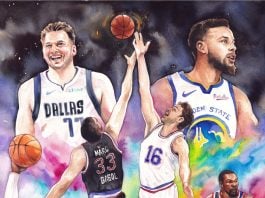