US National anthem boycotter Brittney Griner returned to a Russian courtroom on Tuesday for her drawn-out trial on drug possession and smuggling charges that could bring her up to 10 years in prison if convicted.

“The trial of the two-time Olympic gold medalist and Phoenix Mercury standout began July 1 but only four sessions have been held, some them lasting only a few hours. In one of them she acknowledged that she was carrying vape canisters containing cannabis oil when she was arrested at a Moscow airport in mid-February, but said she had no criminal intent.” 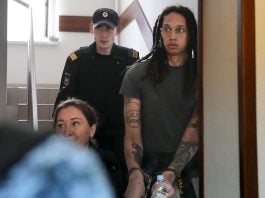