According to Shams Charania of The Athletic and Stadium, free agent Josh Okogie has agreed to a one-year deal with the Phoenix Suns.

During the 2021-22 season, Okogie played in 49 games (6 starts) and averaged 2.7 points and 1.4 rebounds in ten minutes per contest for the Minnesota Timberwolves.

While his three-point shooting (career 27.5% behind the arc), his shot conversion near the rim (40.3%) is acceptable. 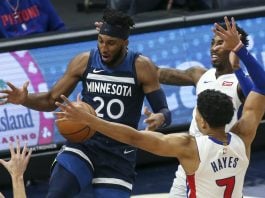