Steph Curry is one of the most challenging players to guard in the NBA. His ability to shoot and create shots for himself makes it very hard for even the best defenders. In this year’s NBA Finals he is averaging 34.3 points per game.

Marcus Smart, who was named the Defensive Player of the Year this season, talked about what it takes to guard Curry and what challenges it presents.

“We all know what he can do outside of 20 feet, 30 to 35, 40 feet. The dude is special in that regard,” the Celtics point guard said ahead of Game 5. “The way that he’s able to affect the game by being able to run around and play off the ball and get himself open.

“So, for him he can affect the game at all levels – passing, play-making, shooting the ball, scoring the ball. So, he got the whole package in and you have to be able to regard every last thing he has and not many players can do that, not a lot of people, especially on that defensive end likes to sit down and play defense.

“It’s not fun, it’s not glamorous at all. You’re not gonna get any much of the credit. It’s none of that. But you have to be willing to take that challenge and just go do it when you guard him.” 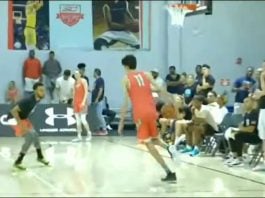