According to Bleacher Report’s Jake Fischer, Phoenix Suns center Deandre Ayton is one of the names Portland Trail Blazers star Damian Lillard would like to play with. With that being said, does it seem like Portland’s #7 pick and Jusuf Nurkic or Josh Hart for Ayton and maybe another player like Jae Crowder, Cam Johnson, or Dario Saric makes the most sense? If the trade is complete, both teams will have a nice combination of youth and experience, as Portland gets younger at center and receive a trusted veteran while Phoenix can move on from an awkward postseason ending with Ayton by bringing in a veteran starter and also having a lottery pick to either draft a young big man like Jalen Duren or defender like Dyson Daniels/Jeremy Sochan based on who they end up trading. 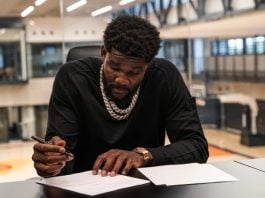