Home NBA Jaylen Brown explains what went through on his Game 2 altercation with... 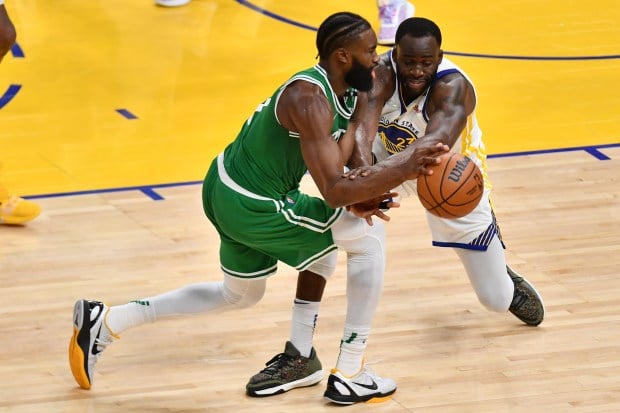 It’s been a physical Game 2 all night long for both the Boston Celtics and the Golden State Warriors.

And Jaylen Brown Brown as well as Draymond Green can attest to that following their altercation.

In the dying seconds of the first half, Celtics are looking to either tie or take the lead approaching halftime. Holding the ball in his hands from a Marcus Smart pass, Brown attempted a long range shot in front of the contesting Green.

Following the shot attempt, both were tangled in the floor and separated by their own teammates.

“I’m not sure what I’m supposed to do there,” Green said about his moment with Green, via Celtics reporter Keith Smith. “He’s got his feet on my head and then he tried to pull my pants down. But that’s what he does. He tries to muck the game up.

“He raised his physicality. We’ve got to raise ours.”

Green wasn’t able to be assessed with his second technical foul of the night after that incident against Brown. He initially received one after a heated scuffle with Grant Williams in the first half.

Indeed, that moment of Green with the star swingman could have been a major swing for the C’s to take a commanding 2-0 series lead heading home to Boston for the continuation of the Finals.

But eventually, the Warriors erupted with Green in a sizzling 35-14 third quarter run to tie the series at 1-1.