Saturday’s Final Four MVP showing from Vasilije Micic looks set to be his last on these shores.

As reported by Eurohoops, the Serbian superstar is ready to test the NBA waters next season with Oklahoma City Thunder owning his rights.

However, with the Thunder loaded at both guard positions, Micic’s road could be bumpy to begin with and the 27-year-old might be reliant on a trade elsewhere.

There is no doubting though that Micic is ready for the challenge after guiding Anadolu Efes to back-to-back EuroLeague titles whilst claiming regular season and two Final Four MVP accolades in that spell.

“This season he had some ups and downs, but at the most important time, he played great. He can play defense, make difficult shots, he has good penetrations. So what else from a point guard?”

Meanwhile, with many of its players now on deals running out, Anadolu Efes will have to work hard to retain many of its current stars ahead of their title defense next season.

Though not set in stone, Shane Larkin, who has really settled in Istanbul since his move from the Boston Celtics in 2018 is still enjoying life in Europe.

The 29-year-old’s contract with Anadolu Efes expires this summer with his future up in the air. However, he gave his biggest hint that he possibly might continue on with the EuroLeague champions.

“I was actually talking to my sister the other day and I was like: I wouldn’t been able to write a better story for myself,” Larkin said to Eurohoops.

“I grew up in America. I didn’t know much about European basketball. To be here, to see the passion, to be in this atmosphere. To do the things that I’ve been able to accomplish here. I wouldn’t trade this for the world.

“Even if I could’ve gone back in the NBA and sign for a max contract, I would much rather choose this. Being able to play in front of these fans, with this passion and experience this in my life. This has been amazing and I’m very happy with everything.” 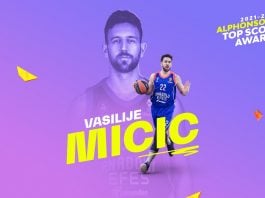