According to Shams Charania of The Athletic and Stadium, the Boston Celtics big man Al Horford will play in Game 2 vs. the Miami Heat tonight. Boston trails 1-0 in the series.

Horford, who is averaging 13 points and 9.4 rebounds per game in the postseason, had been in health and safety protocols since Tuesday, landing there just hours before Game 1 tipped off in Miami. 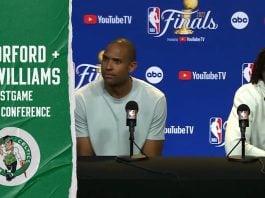 Al Horford on his flagrant foul against Steph Curry Kevon Looney: “I think Draymond did a great job setting the... Kevon Looney on defending Al Horford: “You have to kinda pick...