LeBron James steered clear of revealing whether his son Bronny has beaten him one-on-one yet during a Twitter Q&A with fans on Monday night but did disclose the reason their last game ended prematurely.

LBJ claimed to have smashed a backboard while dunking, bringing an end to the game before a winner could be declared.

The Los Angeles Lakers star also reiterated his desire to play with his son in the NBA during the interaction. 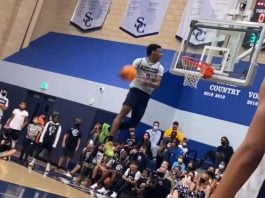