We like to start our gossip column with a super sized Shaqtin’ A Fool episode. Well, why not.

FLIP SAUNDERS: T’WOLVES ARE NOT TANKING

Minnesota Timberwolves President for basketball operations and headcoach Flip Saunders takes offence to what a reporter for NBA TV Matt Harpring told about his team; he told Timberwolves were in tanking mode:

“That’s totally irresponsible, we’re not tanking games,” Saunders said. “If that’s so, then [Utah] got beat by a team who was tanking. We’re playing to win. Our guys are out there: We won two games ago at New York, we lost in the fourth quarter against Charlotte last night. We’re not tanking games. It is irresponsible for them to go on TV saying that. If you work at ESPN, you get fired for saying stuff like that.”

Harpring hopped on Twitter in an attempt to brighten and clarify:

BRAZILIAN-BORN PLAYER TO HAVE “FUCK” ON VEST

Guilherme Carbagiale Fuck, a Brazilian-born 6 foot, 6 inch forward who plays for Medicine Hat College in Alberta, told the Canadian Broadcasting Corporation that his name is of German origins and means “fox,” and pronounced, “foo-key.”

But in the March Canadian tournament, where his team finished in seventh place, he was allowed to use his last name.

But F— said he hopes to continue using the name and he wants to have kids and “spread the F— last name.” 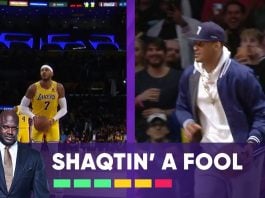 JaVale McGee on constantly being on Shaqtin’ A Fool: “It was... 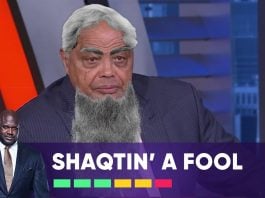 LeBron James makes to latest edition of Shaqtin’ A Fool

Shaqtin’ a Fool: LeBron James takes a walk around Utah