Vassilis Spanoulis, a trailblazer whose exquisite talent and timing marked an epoch in the international game, will become the newest Euroleague Basketball Legend on Wednesday, when the team he led to new heights last decade, Olympiacos Piraeus, opens the playoffs at home.

Spanoulis, a three-time continental champion, Final Four MVP and EuroLeague All-Decade player whose eight seasons on the All-EuroLeague Team are the most by any player this century, will be honored before a sea of his adoring red-and-white fans when Olympiacos hosts AS Monaco in Game 1 of their best-of-five series at Peace and Friendship Stadium.

Among his long list of EuroLeague accomplishments, Spanoulis finished his playing career as the competition’s career leader in an astounding six statistical categories at the time he retired last summer: points (4,445), free throws made (1,131), fouls drawn (1,583), performance index rating (4,183), assists (1,607) and field goals made (1,403). He remains the EuroLeague’s all-time scoring leader thanks to having averaged 12.4 points over a remarkable span of 15 seasons.

Spanoulis started his career in his hometown club, Larissa, and also played for Maroussi before joining Panathinaikos Athens in 2005. After a brief stint with Houston of the NBA, Spanoulis led Panathinaikos to the EuroLeague title in 2009, earning the Final Four MVP honor for the first time. Spanoulis joined Olympiacos in 2010 and played with the Reds for 11 seasons that established him as one of the great leaders in basketball history.

In his second season with Olympiacos, Spanoulis’s last-second assist to long-time teammate Georgios Printezis to complete an 11-minute, 19-point comeback to stun favored CSKA Moscow in the 2012 EuroLeague Championship Game, marking the only major international basketball club title ever won on the season’s very last shot. EuroLeague fans chose that as the play of the decade.

A year later, Spanoulis turned around the 2013 EuroLeague Championship Game as a scorer, downing all of his 22 points after halftime as Olympiacos erased a 17-point deficit against Real Madrid to become just the second repeat EuroLeague champion in two decades. His Final Four MVP accolades in 2012 and 2013 made him just the second player, after Toni Kukoc, to win this award three times.

Spanoulis is currently serving as head coach of specially selected teams of international youth stars in each qualifying event and the finals of the 2021-22 Euroleague Basketball Adidas Next Generation Tournament.

Perhaps even more than for his numbers, Spanoulis will forever be remembered as one of the game’s greatest clutch performers ever.

In crunch time of even the most important games – when every opponent and fan knew who the decider would be – Spanoulis almost always delivered. His masterful use of pick-and-rolls to score at the rim or rack up assists was matched only by his fierce marksmanship as a shooter whose side-step three-pointers were imitated across the globe.

No fan lucky enough to have followed his career will forget feeling sweet anticipation – or dread, if yours was the other team – whenever the ball reached his hands near the end of close EuroLeague games. When the pressure was greatest and brilliance was demanded, no one met the moment as often as Vassilis Spanoulis. 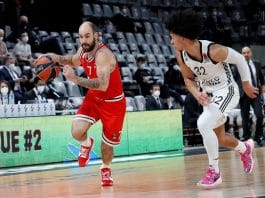 Vassilis Spanoulis returns to the Greek NT after six years ahead...