It appears that Kevin Durant doesn’t like the confidence that his teammate, Bruce Brown, has shown in their upcoming first-round clash against the Boston Celtics.

Brown appeared in the post-game availability of the Nets’ Tuesday Play-In dub against the Cleveland Cavaliers and stated his team’s possible offensive plan against the Celtics. With big man Robert Williams still out and recovering from meniscus surgery, the swingman told reporters that they’ll capitalize on his absence and would attack Al Horford and Daniel Theis in the interior.

Durant was then asked about his opinion on Brown’s take against Boston.

And the future Hall of Famer didn’t hide his legitimate sentiments on the said matter.

“We respect our opponents,” Durant said, via Timothy Rapp of Bleacher Report. “We don’t need to talk about what we’re going to do to them. I just don’t like that. But that’s just how Bruce is. He keeps the same energy throughout the whole season. But we don’t need to say s–t like that. Let’s just go out there and hoop.”

Since Williams’ prolonged absence, the Celtics went on with a 4-3 card and even managed to lock the second place in the Eastern Conference entering the playoffs. Throughout the season, Boston is posting a defensive rating of 99.9 percent when Williams is available – the best in the league. Meanwhile, it suddenly dropped to 104.3 upon his absence.

In Celtics’ regular-season series against the Nets, Williams tallied a three-game average of 11.3 points, 10 boards, and 2.6 blocks. As such, his presence will be heavily missed and the Beantown can only hope that his recovery will be successful enough to let him come back as soon as he is ready.

Boston and Brooklyn will begin their title hopes as they are slated for a Game 1 square-off on Sunday inside the TD Garden. 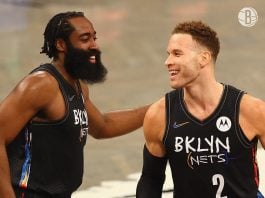