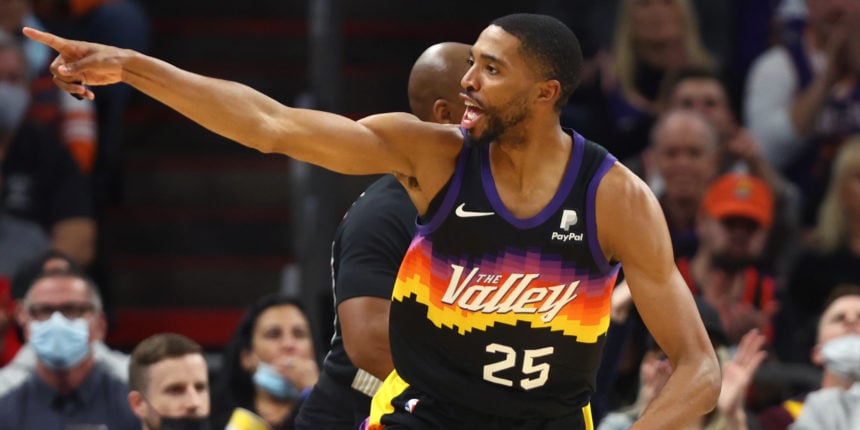 With that smothering defense and top-tier lockdown approach, Mikal Bridges came up huge while becoming one of the undisputed candidates for this season’s Defensive Player of the Year.

Yet in his viewpoint, the said award might be special as it is, but he remains focused on the much bigger prize.

“Obviously I want that, but control what you can control,” Bridges said about his DPOY case, via team writer Gerald Bourguet. “Even if I don’t win it, that doesn’t define who I am.”

Meanwhile, head coach Monty Williams believes that Bridges deserves a lot of recognition for the competition for the award for defending the opponent’s top players.

“I’ve been saying it all year, he does it from the outside in. He’s not in a coverage, which a lot of the bigs are in coverage. He’s actually guarding people … and he guards the toughest guy every night.”

Thanks to Bridges’ defensive masterclass and honed offensive arsenal, the league-leading Phoenix Suns delivered another spectacular come from behind 111-105 win this time against the Utah Jazz. The swingman’s late game heroics and pivotal clamping of Donovan Mitchell for zero points via 0-6 shooting in the fourth period powered the Suns to the franchise-record 32 road wins on Friday evening.

More than just being a defensive player, Phoenix faithful remain dazzled that Bridges continues to grow as one of the league’s two-way rising stars. Whether he ends up winning this year’s race or not, his defensive reputation and effort still deserves to be acknowledged.