The Kansas Jayhawks took home the 2022 national championship on Monday vs. North Carolina in a 72-69 win. Down 15 points at halftime, head coach Bill Self’s squad outscored UNC 47-29 in the 2nd half to help capture his second NCAA title. Self gave the ultimate respect to his team during postgame for uplifting him throughout the last few months after the passing of his father, Bill Self Sr., back in January.

“I don’t know how these guys feel about me, but I’ve never felt more connected to a group than I have this year. And when you go through stuff and when individuals go through stuff, everybody deals with crap. But I never said a word to these guys about anything I was going through, but they rose their own level to a level that propped me up. This is what makes coaching the best, because players can learn from coaches, but certainly coaches can learn from players.” 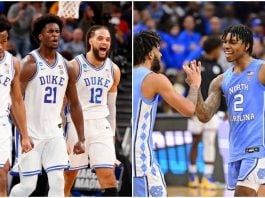