Some sports historians have claimed that the gymnasium at a YMCA building in Paris is the world’s oldest basketball court. However, ten weeks before that game in 1893, an identical incident had occurred on October 17 in the Canadian town of St Stephen, New Brunswick. The court where they competed is still in use. Locals are eager to underline the town’s historical significance.

The History of Basketball

James Naismith, a Canadian residing in Springfield, Massachusetts, created basketball in 1891. It swiftly went across the world, and one of Naismith’s initial players, Lyman Archibald, carried it to St Stephen, where it found a home in a newly erected YMCA. On October 17, 1893, the city’s inaugural contest was noteworthy enough to be covered by the local newspaper’s Saint Croix Courier. It wasn’t the first basketball game in Canada – that title goes to Montreal or Toronto, where games were played on courts that have since been demolished.

The games on the court were played before Naismith began experimenting with the rules to clean up the sport and so differed significantly from those played now. However, the basketball court at St Stephen is exceptionally well-preserved, considering it is located on the top floor of an unremarkable downtown structure. This court is still all-original, save for a few coats of paint. The property was once home to the local YMCA around the turn of the century and has since hosted some local companies. Unfortunately, the carpet on the top level was removed in 2010, following a small fire, showing the old gymnasium floor. That sparked an investigation into a local claim that the first basketball game outside of the United States had been placed there. This heritage is probably one of the main reasons their clubs participate in the USA’s NBA championships, the pedigree that these towns have when it comes to basketball, and why local fans of sports betting Canada turn to their Toronto’s Raptors in the playoff season.

The basketball court has come a long way, and now fans of it are attempting to keep it around for a much longer time and to turn it into a historical touchstone related to sports and the beautiful town it resides in. A group of locals known as Canada 1st Basketball has reached an agreement with the St Croix Vocational Centre to examine alternatives for preserving the property. The ultimate objective is to build a basketball museum as a local tourist attraction and perpetuate the significant history connected with this place.

A few years ago, their ambitious quest was boosted when they asked a local semi-pro basketball team to visit the court. The visiting squad felt as if they were in a historical basketball temple. The perseverance venture is still in its early phases, with Canada 1st Basketball developing a business strategy and brainstorming ideas for how to commemorate the 125th anniversary of the court’s inaugural game this year.

The goal is to use the court one day to bring attention to St Stephen and its rich history, which has been forgotten since the town’s heyday in the 1800s and early 1900s. St Stephen has experienced a long and challenging economic battle in recent decades. When the cotton mill shuttered in 1957, the community’s fortunes began to deteriorate. The basketball museum’s goal is to help the town return to its former glory as a basketball hotspot for fans worldwide. 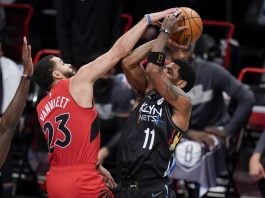 Damon Jones does not qualify the Raptors as contenders in the...

Toronto Raptors make franchise record with 12 wins in a row

Dillon Brooks gets a three-year, $35M extension from the Grizzlies