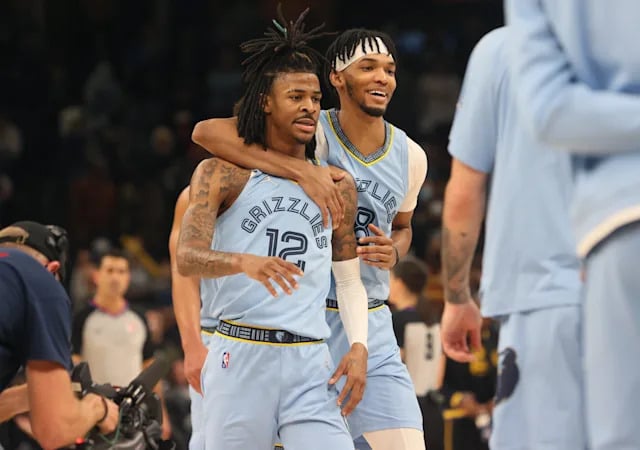 At a young age, the leadership that Ja Morant demonstrates right now for the surging Memphis Grizzlies is truly inspiring.

And in times wherein the pressure is off the charts, the star point guard will always have that full support in his teammates no matter what happens.

With less than 16 seconds left to try to pull a dub for Memphis against the Philadelphia 76ers in a thrilling overtime period, Morant moves past opposing lockdown defender Matisse Thybulle for a rack attack. After seeing himself being clogged in the paint, the first-time All-star located his teammate rookie Ziaire Williams free at the corner and threw him the ball for a possible walk-off dagger.

Unfortunately, Williams missed the potential game winner, as Tyrese Maxey aced the sweet victory with a layup via Thybulle save — shutting down the sizzling Grizz squad with a cold narrow Monday loss, 122-119.

Right at the postgame, Morant, who had 37 markers and 5 assists, told reporters that if he had another opportunity to find Williams open for a bucket, he will pass the ball to him again — saying that he believes for the first-year pro to drain it.

And if ever there’s someone within the fandom and the franchise that has to be mad at in connection the loss, the young upcoming superstar already claimed that he should be the one taking it — citing his errors in missed free throws, long bombs and nine costly turnovers throughout the encounter with the fellow hot ball club.

“If it’s anybody you want to be mad at, it can be me,” Morant said via Damichael Cole of Memphis News. “I had nine turnovers.”

The Grizzlies had a chilling touch, shooting 6-for-30 from three-point land while having 68 percent from charity stripe from nine misses. For a team that has championship aspirations, having inconsistencies is truly an issue. Thankfully, this team keeps on growing behind the lead of Morant and the guidance of head coach Taylor Jenkins.

While this one is a heartbreaking loss out of a close combat, seeing Morant stand up and take the accountability is a priceless moment for the Memphis faithful. With the maturity he keeps on showing, he is truly on his way towards the door of greatness.

Currently one of the surprising teams this season, the third-seeded Grizzlies being bannered by Morant will travel to New York to face the Knicks on Wednesday.