Richaun Holmes will not be available for the Sacramento Kings’ next two games, after undergoing the procedure to repair a right eye laceration. Holmes suffered the injury during Sacramento’s 142-130 win over the Magic Wednesday.

Holmes has been the starting center in Sacramento for the last two seasons. He will not travel with the team to face the Charlotte Hornets and the Cleveland Cavaliers.

The Bowling Green alumni is averaging almost a double-double with 14.0 points, 9.3 rebounds, and 1.4 assists through 22 games with the Sacramento Kings this year.

The Kings are coming off a three-game winning streak (11-14 record) as Tristan Thompson and Alex Len are expected to see increased minutes in the next two games vs Charlotte and Cleveland. 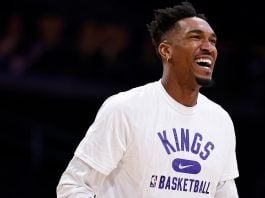