Rokas Jokubaitis is expected to leave Zalgiris Kaunas and sign with FC Barcelona, if he stays in Europe and doesn’t move to the NBA.

Jokubaitis has declared for the 2021 NBA Draft, but it is unknown if he will move to the NBA. If not, he will return to Europe and join FC Barcelona.

“Jokubaitis is available to come to the NBA immediately, paying a buyout to Zalgiris, but if a team elects to stash him, he will play for his old coach Sarunas Jasikevicius in Barcelona next season,” Jonathan Givony of ESPN tweeted.

For their part, FC Barcelona is making changes to its roster and is set to sign former Real Madrid guard Nicolas Laprovittola to two-year deal. 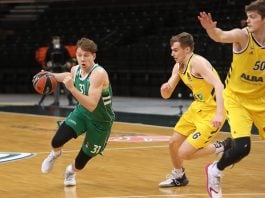