Mike Budenholzer was asked about the hot topic concerning Giannis Antetokounmpo’s free throw routine. During the postseason, several teams called out the officials for not calling the free throw violations.

The last two-minute report for the Game 1 confirmed that Antetokounmpo should have been called for violations on both his free throw attempts with 5.3 seconds remaining in the contest.

“He’s got his routine. It’s been a big topic of conversation, I get it, I understand it. This conversation and debate has been going on for a long time, he’s well aware, and he’s in a good place,” Budenholzer said on Giannis’ routine.

Antetokounmpo’s lengthy routine has sparked controversy all postseason. He is only shooting 55.4 percent from the line overall. The Bucks are down 1-0 ahead of Game 2 vs. Atlanta on Friday. 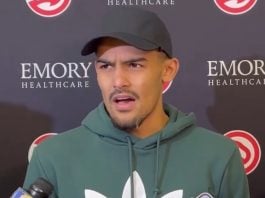