The NBA has announced the launch of the Jr. NBA Skills Challenge presented by Gatorade®, an eight-week bracket tournament that will feature virtual head-to-head challenges that can be completed from home. The program, hosted on the HomeCourt App, will run from today through August across France, Italy and the United Kingdom. Supporting the Jr. NBA Skills Challenge, Cleveland Cavaliers guard Collin Sexton will participate in a video ‘meet and greet’ congratulating the top five winners from each country who will also be awarded vouchers for NBAStore.eu.

Gatorade, the world’s number one sports drink and official partner of the NBA, joins as presenting partner of the program and will reward successful participants with a variety of branded prizes. Open to app users 16 years and older, the tournament will test a range of basketball skills including ball handling and agility over the course of a three-week pre-qualifier challenge period, followed by a five-week bracket tournament. The winners from that stage will then be invited to join an exclusive “Winners’ Circle” community within the app. Following the “Grand Championship” challenge, prize winners will be identified using the app’s the built-in team leaderboard functionality.

“Basketball is something that means a lot, not just on the court, but off the court as well. It’s very important to be around your peers and be around people that love the game, kids that want to compete just like you. The learning and the development is huge, if you’re starting at a young age, you’re able to develop a lot more and not have to rush it. Natural talent can only take you so far so you need to be sharp, especially when you get to the highest level. Everyone is really good so you have to be smart and understand strategies, tendencies of other guys.

The Jr. NBA Skills Challenge will involve shooting, passing and skills competitions – basically like a little All-Star weekend. Participants will learn the different skills of passing, defence, and also learning how to stretch and take care of your body and do things without a basketball hoop. Virtual programs are more important now than ever just because you’re able to do things at your house, knowing that you don’t need a basketball hoop to work on your game each and every day. There’s a lot of things you can do in your driveway, there’s things you can do to recover your body whether it’s stretching or just learning the game by watching films.

The program is open to players 16 years and older who want to improve their game and also ready to learn and get better. My advice would be to give it your all, give it 110% because if you’re good to the game it will be good to you.

It means everything to give back to the game at this stage of my career and create a part in inspiring people to develop their skills. Any time I’m able to give my time, I’m there, just because I was always wanted someone to come back to my neighbourhood and just show some little things I can improve on and get better at. It’s going to be beneficial to know that I’m there or another athlete it there that you can go and talk to them, it goes a long way.” 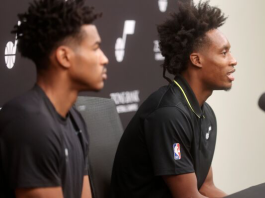 Collin Sexton: “I’m excited just to pretty much be one of... Collin Sexton notes “100 percent” available to play next season for...