Spain big man and potential lottery pick, Usman Garuba, has submitted paperwork to the league office to make himself eligible for the 2021 NBA draft, according to ESPN’s Jonathan Givony.

While the per-game averages may not stand out, Garuba played some of his best basketball in the EuroLeague playoffs, as he recorded a career-high 24 points and 12 rebounds in a Game 4 win over Anadolu Efes in the quarterfinals.

Garuba won the EuroLeague’s Rising Star award in mid-May for the 2020-21 season and was also named the “Best Young Player” of the 2020-2021 ACB season in late April.

He is considered the most versatile defensive prospect in the 2021 NBA Draft, as he already has considerable experience guarding some of the most formidable players in the international game, be it smaller point guards, playmaking wings or traditional big men, notes Givony.

As a strong passer who is developing a more consistent three-point shot, Garuba has drawn comparisons from NBA scouts to Toronto Raptors’ OG Anunoby and Charlotte Hornets’ P.J. Washington.

Once Garuba’s season is finished sometime in mid-June, he will likely then head to the United States for private team workouts and interviews in hopes of solidifying his status as a lottery pick. 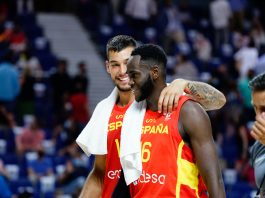