The New York Knicks have banned a fan who spit at Atlanta Hawks guard Trae Young during Game 2 of their first-round playoff series.

The statement from the Knicks:

“We investigated the matter and determined that this patron, who is not a season ticket holder, did indeed spit on Trae Young, and for that reason, he is now banned from The Garden indefinitely. We apologize to Trae and the entire Atlanta Hawks organization for this fan’s behavior. This was completely unacceptable and will not be tolerated in our venue. We have turned the information over to the appropriate authorities.”

“We appreciate the Garden’s response to the incident and Trae’s focus remains on his teammates and Game 3,” Young’s agent, Omar Wilkes, said.

Hawks head coach Nate McMillan said that he wasn’t aware of what happened until after the game.

“You have to draw a line,” said McMillan. “Unfortunately, I just think we’re living in a society where really, people just don’t have respect anymore. In no way should that be allowed or should that happen at a sporting event or really any event where you are coming to watch a game. I think New York did what they should’ve done in that situation. It’s uncalled for. And it shouldn’t happen.”

Young’s teammates Kevin Huerter and John Collins spoke about the incident as well.

“What happened with Trae or what happened with Russell Westbrook, you know, fans are passionate but there’s no place for any of that. The response by the Knicks for banning him, I hope that lasts a long time if not forever,” said Huerter. “There’s no place for it. These fans, if you take away the barriers and you take away security, if you’re face-to-face with an NBA player and you think you’re going to do something like that, I doubt it’s gonna go your way. People gotta remember that.”

“I don’t even understand like, you’re coming to a basketball game to watch a person play basketball, where does it come into your mind to spit at this person? How disrespectful,” said Collins.

The incident at Madison Square Garden occurred on the same night that a Philadelphia 76ers fan dumped popcorn on Russell Westbrook as he headed back to the locker room after leaving the game with an ankle injury.

That fan was also banned.

The NBA released a statement saying that “an enhanced fan code of conduct will be vigorously enforced in order to ensure a safe and respectful environment for all involved.” 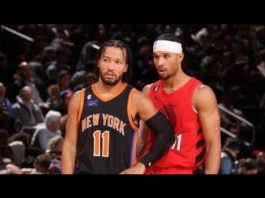