Charlotte Hornets rookie LaMelo Ball underwent surgery on his fractured right wrist and will be re-evaluated in approximately four weeks, according to Shams Charania.

Ball will have a four-week recovery timeline before he begins rehab, leaving the possibility for him to return this season.

It was originally believed that Ball would miss the rest of the season with his fractured right wrist, but this report sounds more optimistic.

The 19-year-old suffered the injury against the Los Angeles Clippers on March 20 after landing hard on his wrist.

He had recorded seven double-doubles and one triple-double this season.

Guards Terry Rozier and Devonte’ Graham will lead the Hornets’ backcourt and handle most of the ball-handling responsibilities in Ball’s absence.

Tracy McGrady thinks LaMelo Ball will be the future face of...

Isaiah Thomas on LaMelo Ball: “He’s going to be the face... 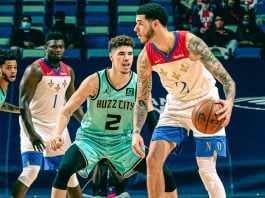