The Brooklyn Nets lost their third game in a row as they fell to the Detroit Pistons.

However, Kyrie Irving didn’t lose confidence in his team. On the contrary, he was enthusiastic about it. Moreover, he sent a signal to the NBA.

“As a warrior that I am, and the energy that I have alongside my teammates, we just have to turn that corner. We haven’t done it yet, but we will. I’m telling you, the league’s going to be on notice when that happens,” Irving said per Michael Scotto.

According to Irving, Brooklyn should be dominating based on their roster but instead they are average. “I don’t think that we go out every single day of our lives and sacrifice the time in order to be average at anything. We look very average, and we have the talent that the eye test presents that we should be dominating,” he said. 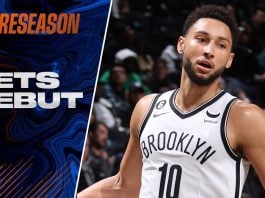