Vogel said Jokic and Murray are two superstars that can ‘give nightmares’ to their opponents.

“Those two alone give an opposing coach nightmares,” Vogel said about Jokic and Murray, via Ryan Ward of Lakers Daily.

Jokic is averaging 26.8 points, 11.8 rebounds and 8.6 assists for the Nuggets this season. Meanwhile, Murray has 18.9 points, four rebounds and four assists per game. 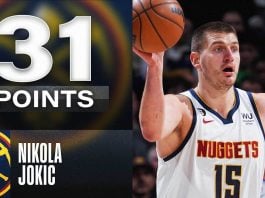