We had a mini break to recover from the opening weekend of the Euroleague season, where we saw some enthralling contests. So, the gossip returns for another day. Might we make this our Monday-Friday column? Hmmm…

FINALS MVP OUT FOR PRE-SEASON … MAYBE START OF SEASON

San Antonio Spurs’ Kawhi Leonard will miss the remainder of the NBA pre-season schedule and even the start of the new season with a badly infected eye.

The Finals MVP will be a big miss for Spurs coach Gregg Popovich, but better that he this sort of thing has happened now and that he is healthy for the season ahead. Even if it means missing one game.

Via the San Antonio Express News:

The infection in Kawhi Leonard’s right eye has spread to his left, and the Spurs’ small forward is likely to miss the remainder of the team’s preseason games.

Based on the tentative time frame for his recovery, his availability for the Oct. 28 regular-season opener against the Dallas Mavericks also appears to be in question.

“It is going back and forth between the two (eyes),” coach Gregg Popovich said before tipoff of the Spurs’ game against the Miami Heat at the AT&T Center on Saturday. “It’s crazy. Kawhi is still out for 10 more days.”

Leonard, the 23-year-old small forward who was Most Valuable Player of the 2014 NBA Finals, played 29 minutes of the preseason opener in Berlin against European team Alba Berlin.

MELO DOESN’T THINK HE WILL BE 14-15 SCORING CHAMPION

New York Knicks’ Carmelo Anthony believes that he will not be this season’s scoring champion.

Being honest, he should be thinking more of the NBA championship than individual accolades.

Anthony has even hinted of shooting the ball less as the Knicks adjust to the new triangle system.

Again though, Carmelo Anthony looks like a guy that seems to care more about individual glory than the team.

SUNS OWNER AND POPOVICH HAVING DIGS AT EACH OTHER

San Antonio Spurs coach Gregg Popovich dismissed Phoenix Suns owner Robert Sarver’s critical comments as silly and said they should have been made while wearing a ”chicken suit.”
Sarver got on the public address microphone Thursday night in Phoenix and apologized to the fans because the Spurs were without several players and Popovich himself.

”This is not the game you paid your hard-earned money to watch,” Sarver told the crowd. ”I apologize for it. And I want you to send me your tickets if you came tonight with a return envelope and I’ve got a gift for you on behalf of the Suns for showing up tonight. Thank you.”

The Spurs were without Kawhi Leonard (eye infection), Tiago Splitter (calf) and Patty Mills (rotator cuff) due to injury and Tim Duncan and Manu Ginobili remained home to rest.

In typical Popovich fashion, he was quick with a zinger.

”The only thing that surprises me is that he didn’t say it in a chicken suit. I’ll just leave it at that,” Popovich said Saturday before San Antonio’s preseason home opener against Miami.

”As I said, the silliness begins. Most wise individuals would check facts before they made statements; unless you’re interested in putting on a show. In that case, the facts get in your way, as in this case.”

Popovich pointed out these recent absences were excusable, though.

”We had five guys we didn’t send,” Popovich told the San Antonio Express-News.

”Patty Mills had a shoulder operation over the summer. Tiago Splitter has been out the whole preseason. Kawhi Leonard was out and is still out for 10 more days. The other two, Duncan and Ginobili, are two of the oldest guys in the league who just came back from a 13-day European trip.”

TCHICAMBOUD NOT HAPPY WITH ELAN CHALON

The point guard wants more minutes with his side and feels he isn’t getting enough time on the court.

Tchicamboud came on with a minute left of the third quarter in the team domestic game this past weekend. He spent the whole game before that on the bench. Harsh on such a talented player.

“They pay me to play but the coach makes choices,” said the player. “For the moment I am a player of Chalon. But it may change very quickly.” 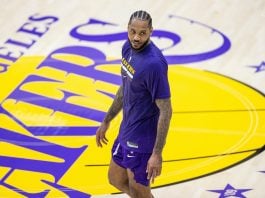