Israeli coach Ronen Ginzburg is spending his eighth consecutive season at the helm of the Czech national team. Under his guidance, the country finally qualified for the World Cup, a tournament which hadn’t seen for almost 40 years, and claimed the sixth place there. It is the best result ever for the Czech team.

In October, Ginzburg’s contribution was recognized as he got a Czech passport to ease his travelling around Europe.

“I got a passport not because I speak the language or because I married a Czech woman,” he says. “Unfortunately! I got it because I brought some honor to the country, I am working with young coaches there, and they bring respect, too. People tell me that it is the first time when they see a good reaction on somebody getting a passport of their country.”

This pretty much says for itself: Ginzburg has earned recognition all over Europe with none or very little number of stars on his roster.

It is actually limited to just two players, Jan Vesely and Tomas Satoransky. Surprisingly, the coach, who has almost never worked with big players, gets along with them pretty well. How does he do this?

“I discovered that working with star players is easier than working with average ones,” he notes. “I think that days when coach could be a dictator are gone. People have changed, young players have changed, it is not the same environment anymore.

Like Rick Pitino said, today to have a knowledge is not enough to be a coach. So, I am trying to build good relationships with players and respect them, but, at the same time, I will never give up on my principles on and off the court.”

Among those principles, by the way, is asking for advice from his players. Ginzburg is sure there are times when players see the situation much better than any member of the coaching staff.

“With all the respect to us, coaches, sometimes we need to listen to our players,” Neno says. “A few years ago, I was in a clinic with Zeljko Obradovic, and he also said – listen to your players, there are times when they know better than you.

It is not like you listen to them all the time and do what they tell you, but there are some moments when another opinion is needed. We have the same target, it is to win games. For winning, I can do everything.”

Eager to win as many games as he can, now Ronen Ginzburg is openly talking about his wish to coach not only a national team. He says at first there was a restriction in his contract with the Czech team, but then Neno asked for a right to coach a club, and he got permission. Now, he is allowed to work for both a national team and a club and he would like to do so.

“I feel I really want to, because working only with the national team has you rusty, you need some time to come back to your shape, just like players,” Ginzburg says.

“That is why in the national team we always have friendly games, and if you think it is for the players – no, it is for me first of all. Sometimes throughout your career it’ is good to coach only at the national level, but it is not a long time usually,” he adds.

With his wish to coach a club, it should be a very good organization. Neno says he has offers every summer and during seasons, too, but, so far, every time something was not fitting the expectations.

It is very interesting if we are going to see him coaching a club in the nearest future, but one thing is clear: Ronen Ginzburg is ready for a new challenge. Is the challenge ready?

*The interview was conducted by Artem Komarov and was edited by the Chief Editor of TalkBasket, Yiannis Bouranis. 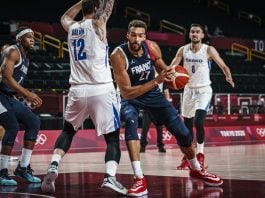